A roadmap for the digital economy 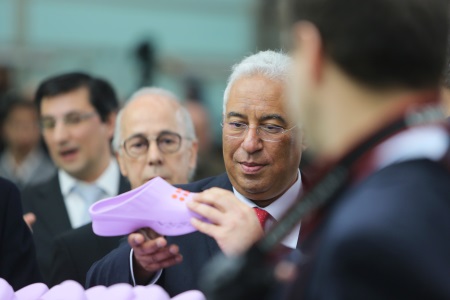 It’s the sexiest industry in Europe and is increasingly a model of competitiveness, by reinventing itself and increasing exports every year. The footwear industry was part of the Innovation Roadmap, which included a visit of the Prime Minister, António Costa. In the event, the footwear sector presented a “Roadmap of the Footwear Sector for the Digital Economy”. FOOTure 4.0 predicts an investment of 50 million euros until 2020 and its main goal is to make the sector “a world leader in the field of customer relations, through the sophistication of the products, a rapid response capability and great support service”. To achieve this vision, APICCAPS and the Footwear Technology Center of Portugal (CTCP) have created a new ecosystem by involving over 70 entities, including companies, startups, universities, intelligence centers and entities within the scientific and technological system.

“Nowadays, this industry is growing by innovation and has turned a so called traditional sector into a sector with a future. FOOTure, the challenge that the footwear industry has set for itself, is supported by structural funds and by the Industry 4.0 strategy”, stated Manuel Caldeira Cabral, the Minister of Economy.

FOOTure 4.0 aims to explore the opportunities created by Industry 4.0 and has defined four strategic priorities: create forms of interaction with the customer within a digital and networked context; improve the flexibility, response time to customers, business intelligence and sustainability; qualify the sector for Industry 4.0 by making it more dynamic, innovative and able to create new businesses; and to improve the sector’s image and intelligence.
The “Roadmap of the Footwear Sector for the Digital Economy” presents 14 actions divided by four strategic axes. The first relates to “Customer Experience’s Innovation”. The Portuguese footwear industry still has a relatively limited contact with final costumers, which has implications on the development of products and definition of commercial and promotional strategies. Industry 4.0 tools offer new opportunities for action in this domain. For instances, the Roadmap predicts the development of new business models, the use of omnichannel strategies and the adoption of co-creation processes with the customer.

The second line concerns “Intelligent Manufacturing Systems”. Here are included actions regarding the adoption of technologies and processes destined to deepen a rapid and flexible production, transformations in terms of products’ development and efficient prototyping, reformulation of the value chain to a more collaborative and sustainable end, and process digitalization in general.
“Qualification” is the keyword of the third strategic line. The aim is to attract youngsters, create new skills, qualify the companies’ top management and promote qualified entrepreneurship.
The fourth line consists of activities within the “Sectorial Leadership and Plan Coordination” domains, led by APICCAPS and CTCP. Essentially, this line embraces all the coordination of the action plan and collective benefit actions, such as intelligence or the collective image promotion of an industry or cluster.
Of the predicted 50 million euros investment until 2020, 12 million are already on track. Half of that value is being invested through project FAMEST, by CTCP, and is being promoted by a consortium of 23 companies of the sector’s entire value chain, by nine I&I entities and led by Kyaia.

Prime Minister visits the sector
On a roadmap that recognizes innovation throughout the country, the footwear industry was the 3rd sector highlighted by the Government. “It wasn't possible to do an Innovation Roadmap and not having a day dedicated to footwear. Firstly, because the recent history of the footwear industry is a good demonstration of how the driving force of our development must rely on innovation. That’s why, when I want to give an example of how innovation is indeed an engine for development, the footwear’s example is always what comes to my mind”, said António Costa. The Prime Minister has visited the footwear industry with Manuel Caldeira Cabral, Minister of Economy, Pedro Nuno Santos, Secretary of State for Parliamentary Affairs, and Ana Teresa Lehnman, State Secretary for Industry.
The first stop was Procalçado, in Vila Nova de Gaia, a company with 45 years of history and a production of 5 million pairs of shoe soles per year. In less than a decade, Procalçado went from being merely a components’ company to creating two brands, Wook and Lemon Jelly. Later, the Innovation Roadmap went to the Footwear Technology Center of Portugal (CTCP), in São João da Madeira. The investment in competitiveness is a main focus of FOOTure 4.0, which aims to make the sector a world leader in the field of customer relations. Thus, the Portuguese footwear future requires innovation and entrepreneurship. At the Footwear Technology Center, António Costa got to know a new generation of companies that are revolutionizing the footwear sector. Undandy, And I Wonder and Feet It some of the examples of startups that have created innovative business models within the digital universe.
The Prime Minister also got to know Skypro, a company specialized in the production of footwear to airlines and ground handling, therefore designed to all latitudes, and Olives, a new brand from São João da Madeira that manufactures felt products. “We have seen here today startups that have local production but are able to export to hundreds of countries through online trade. We also have industries that have improved production processes by incorporating digitally gathered information. Also, there are productions that have improved with the information gathered from the customers’ feedback and trends”, stated António Costa.
To Manuel Carlos Silva, Chief Executive of APICCAPS, “the footwear industry has become the sector of the Portuguese economy with greater degree of expertise and highest trade balance. (…) By placing innovation at the forefront of the political agenda, the Prime Minister has sent a signal of personal commitment into this long journey the Portuguese society has ahead, made by small daily steps with persistence and passion.”

António Costa, Prime Minister
“The footwear sector has been having the ability to reinvent itself through a strong investment in innovation to differentiate and qualify its offer by gaining market share. In 2017, the Portuguese footwear companies have exported 83 million pairs of shoes”.