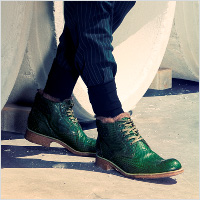 The company started operating in 1945 by handcrafting men s footwear. It soon attracted renowned followers, specially key Portuguese politicians such as Mayors, Parliamentarians and even Presidents of the Republic. Mariano s success crossed borders and some FIFA (International Football Association) and UN (United Nations Organization) leading officials no longer do without the footwear from the São João da Madeira based company.

Over more than six decades, Mariano has always favored the Portuguese domestic market. However, it is now time to invest otherwise. Our top priority is now to export, administrator Augusto Oliveira revealed.  We intend both to consolidate our presence in European markets, such as Germany, Austria, France or Switzerland, and to invest in new markets, whether in Europe or in other continents, he said. That s why the company is participating in key international fairs, especially MICAM.

Another key focus will be on the presentation of innovative footwear, but without neglecting the manufacture of high quality footwear. We have always combined know-how and traditional, even artisanal, manufacturing methods with state-of-the-art technology, pointed out Augusto Oliveira. In order to fully meet the expectations of an increasingly distinct audience, Mariano invested in developing an exotic range: we create footwear from all sorts of materials, like snakes, crocodiles, exotic fish or even chicken legs.

An ambitious bet that has attracted the attention of clients around the world. According to Augusto Oliveira, the difficult international situation demands that businesses have an attitude of constant innovation and that is just what Mariano, a company already in its third generation of family owners, is trying to do.