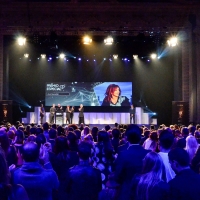 For the third year, the Tivoli Theatre in Lisbon was decked out to host the Fashion Awards. Organised by Fashion TV and the Lisbon Municipal Council, this initiative rewarded the professionals of ´Made in Portugal´.

In the ´Best Model´ categories, the winners were Sara Sampaio (Female), who had already won in 2011, Gonçalo Teixeira (Male) and Francisca Perez (New Face).

Designer Ana Salazar received the Fashion TV Special Prize. According to the organization, this is a tribute to the creator who, through talent and daring, put Portugal in the world of fashion. Ana Salazar celebrated her 40th anniversary of activity in the fashion industry, this year, and her 30th as a designer. In 1978, she established her eponymous brand, sold both in Portugal and abroad. In 1985, she opened a shop/showroom in Paris, France. Since the late 1980s, she started presenting her collections in Lisbon, Paris, Milan and New York. In 1991, Ana Salazar was one of the designers who participated in the inaugural edition of ModaLisboa, held at São Luiz Municipal Theatre. In 1997, in recognition for her services in the advancement of Portuguese fashion, she was awarded the Order of Prince Henry by then-President of the Republic, Jorge Sampaio.