GAPI rewards the most 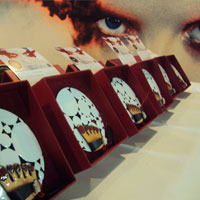 For the eighth consecutive year and with the city of Milan as the backdrop, the Industrial Property Support Office (GAPI) of the Technological Footwear Centre of Portugal (CTCP) once again recognised the most innovative companies.

In this 8th initiative by the CTCP and INPI (National Industrial Property Institute) six companies received awards along with an honourable mention.

Too By Vírus, the recent brand launched by AS – Indústria de Calçado, was distinguished as the “Best New Brand”. Created less than a year ago, Too By Vírus is a new brand of footwear geared towards the modern, urban woman who is looking for comfort. It is now on the market and is the outcome of a selection of international trends in feminine preferences, namely in the German, Belgian and French markets.

In the “Prestige Collection” category, Luis Onofre once again beat the competition. His collection for Summer 2011 stood out for its excellence, embellished by elegant details.
In the design segment, DKode and Tel Yoh took home another «Footwear Oscar ». The recently created Carlos Santos brand won in the men’s footwear category.  Also in the design segment, EJECT’s proposal (the development of multi-functional footwear, a kind of amphibian footwear) ended up with an honourable mention.

For the first time a company was distinguished in the “Ecological Footwear” category. Softwaves’ proposal based on cushioning and air capsules incorporated in the sole of the shoe so as to ventilate one’s foot while walking, and on the massage inner sole, which stimulates blood circulation.

The attribution of the Innovation Awards in the Footwear Sector was decided by a jury made up from representatives of the INPI (which chaired the jury), CTCP, AICEP and CFPIC. It should be recalled that, in recent years, the GAPI has already made awards to almost three dozen different Portuguese companies and brands.

Brand demand takes off
The commercial area is increasingly the main priority for Portuguese footwear companies. In this regard, companies have invested on the one hand, and as never before, in promotional activity abroad and, on the other, in the creation and development of new own brands.

According to data of the APICCAPS’ Studies Centre, it is estimated that sales of own brands in the footwear sector already amount to 50% of the global turnover of the sector. We should add that there are a number of brands that have been created and that are beginning to spark international curiosity.

In the last three years, the sector has created about 70 brands. Just in the first eight months of 2010, 17 new brands were created through the Industrial Property Support Office (GAPI), of the Technological Footwear Centre.

Another important fact has to do with the focus on conception and development. Portuguese companies increasingly want to stand out on the international competitive stage and, for this reason, they have patented a number of these innovations. So, since the start of the year 114 models of footwear have been registered with innovative characteristics.