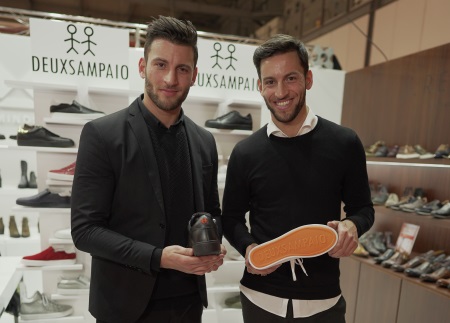 Sampaio twins go from runways to the footwear industry. They walked through hundreds of runways in the past few years but now they want to conquer the world from a footwear factory.
They were born in Paris, in 1986, but at the age of five the brothers Jonathan and Kevin Sampaio have moved to Felgueiras with their parents, where they are now taking firm steps as businessmen after an internationally recognized career in fashion.
The twins have walked the runways for renowned designers and lived in New York for about a decade but it’s in their hometown, where they family roots are, that they are investing in footwear, clothing and wine businesses. “Deux Sampaio” is the footwear brand, which they recently presented at MICAM, in Milan. The same place where, curiously, they gained prestige in fashion world for walking down the runway for Dolce & Gabbana, in 2007.
The idea came up three years ago, when they were still in New York, and it brought them back to Portugal with the goal of creating a “whole brand that one can wear from head to toes”. For now, they offer five sport models with the label “made in heaven”, which directly refers to the paradise of the “made in Portugal”.
The models are backed with a specialized team with the ability of going from the concept to a comfortable shape that fits every feet. Comfort and quality are the basis of the proposals that will be available for sale at an average price of 200€ (retail selling price).
For that, they have Carité as a partner, led by Reinaldo Teixeira and with 20 years of experience in the footwear sector. Holder of Topik Relevo, Brada Shoes Concept, Arka and J. Reinaldo, Carité employs 520 workers and produces a million pairs of shoes per year. With a turnover of 30 million euros in the international market, it is one of the top 5 biggest Portuguese footwear companies.