Number of actions increases by 51% 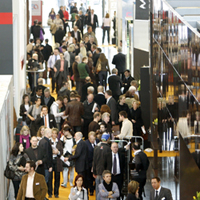 The external promotion of PTShoes in 2010 will increase by 51% over the previous year. In 2009 the Portuguese Footwear Industrie participated in 53 fairs abroad and held a trade mission to Angola. Numbers that grow up to 80 actions in 2010. Is expected the participation in 76 fairs and exhibitions and four exploratory missions to Angola, Libya, Mexico and Tunisia.

It is expected that over than 140 footwear companies will participate in this mega-promotional program internationally, with an investment of around 9 million euros. This is the third consecutive year that the investment  in external promotion increases. From the beginning of 2008 until the end of 2010, the Portuguese Footwear industry invests 24 million euros in promotion abroad.

There are four the most important objectives for the implementation of this promotional campaign: consolidating the position of the Portuguese footwear in foreign markets, diversify the export destination, find new markets and allow to new companies to begin the internationalization process.