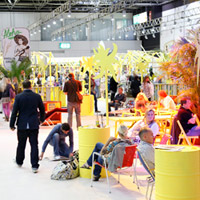 Although the first signs of recovery begun to be perceived in an international level, especially regarding the “high” reviews of economic forecasts, the professional area live an environment of uncertainty. For the footwear business mans still a feeling of confidence that in the next year will be better than 2009.That’s the reason why , the sector has strengthened its presence at international fairs.

In Milan, the largest professional footwear exhibition in the world, which had the participation of 1601 exhibitors, 589 foreign (80 of which are Portuguese, one of the largest holdings of the sector in overseas promotional initiative) the results seem to indicate that there continue to be a sense of caution on a global scale. The number of professional visitors fell 4.9% to 39,857 compared to the last edition, while the number of foreign visitors rose to 20. 644, this is less than 2.3% in the September issue of 2008.

In Germany, the GDS and Global Shoes, held from 11 to 13 September, returned to acquire points with a total of 1145 exhibitors from 42 countries, 765 of whom participated in the GDS (a reference fair) and 380 in the Global Shoes (dominated by Asians exhibitors ).

According to Messe from Dusseldorf, a total of 28,500 buyers, half of them foreigners from 82 countries visited the “fair of the fairs”. 6400 visitors also went the Global Shoes, particularly from the Benelux, Italy, United Kingdom, Spain and France. According to data from the GDS, the Düsseldorf trade fair has been particularly positive, with 93% of visitors to evaluate the GDS as good or very good.