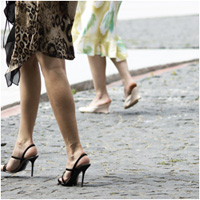 “How do we reinvent footwear from the most recent innovation of a 100% Portuguese green raw material?”. The question, still unanswered until just a short time ago, was asked by Paulo Américo, CEO of Amorim Cork Composites, during the conference “Innovation in the Products of the Traditional Cork and Footwear Sectors”, hosted by Santa Maria da Feira Town Hall. The response came a few minutes later. The footwear and cork sectors are working together to internationally present a revolutionary and genuinely Portuguese product.

Profession: Bottier, Rufel and Sedacor (Sociedade Exportadora de Artigos de Cortiça, Lda) are developing a technical cork that could replace leather in the shoe industry in the future. But there are other companies, like ICC, specialised in the production of technical footwear, that are also investing in this area.

António Amorim, Chairman of APCOR (Portuguese Cork Association) assures us that “the shoe industry is one of the business areas in which cork companies have invested most”. The cork sector is running its strongest promotion campaign ever, with a total budget of 21 million Euros, aimed at promoting cork internationally.

On the one hand APCOR will push to promote the virtues of using cork for bottle stoppers, in construction and in decoration (these three business areas represent around 90% of the sector’s exports) and, on the other, to provide companies with the technical and technological capacities that will help them to become a benchmark on the competitive international stage, namely through the presentation of new products whether for the clothing sector, the shoe industry, Moroccan leather articles, jewellery, the aerospace industry or the pharmaceutical industry. In António Amorim’s view the major challenge is “to surprise the markets by presenting new applications and products”. This challenge has, in fact, already been taken up by companies in the shoe industry, as is the case of Profession: Bottier (of the company Ferreira Avelar & Irmão, Lda), which is the first model of shoes totally made from cork, presented in Milan last September. According to Ruben Avelar the application of cork in footwear, even replacing leather, makes “the models lighter, more ecological and even cheaper”. It is not a matter of “replacing leather by cork, but rather promoting an innovation using an environment-friendly and totally Portuguese raw material”.  The designer Paulo Brandão praised all the efforts to help to “present innovative products with identity”.

Its sustainability (ecology, CO2 retention, Biodiversity) makes cork a unique product. Throughout the whole campaign that is being developed by APCOR, cork will appear as a natural, modern and elegant product, where the idea of eco-design is topmost, with unique technical and sensorial characteristics, combining the product’s comfort with its good looks.