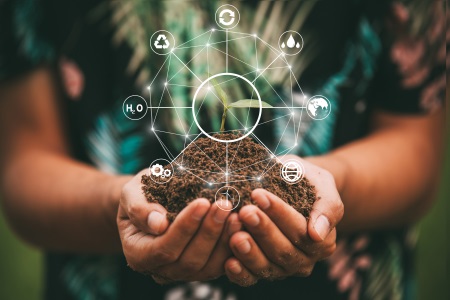 Thirty two international companies just signed a pact with the goal of reducing the environmental impact of the fashion industry. The document, proposed by the French president, Emmanuel Macron, was presented during the G7 gathering, in Biarritz, and has François-Henri Pinault, the chairman of the Kering group, as the head.
Environmental were established, withing he horizons of 2030 and 2050, which aim to limit the impact of the fashion industry in the climate, biodiversity and the oceans. Stop Global Warming, Restore Diversity and Protect the Ocean are the main three goals of this pact. Eliminate liquid carbon emissions until 2050 and transform all the energy used by the groups into 100% reusable by 2030, are some of the predicted measures within the climate area. Within biodiversity, the signing members aim to favor farms that protect the ecosystem and renounce stocks from intensive cattle breeding. Regarding the oceans, companies want to fight the use of disposable plastic, therefore investing in new materials.
“The goals of the Fashion Pact are strongly aligned with our own work of these past decade and we’re anxious to work with the other signing members to help transform our industry, support our communities and protect the environment”, stated Marco Gobetti. Burberry’s CEO believes these companies can’t solve environmental issues alone and that this collaboration between all key players from the industry will be the way to success.
“We strongly believe in this initiative and we’re excited to work together with our partners in the priorities that were established in the Fashion Pact”, said Puma’s CEO.  Bjørn Gulden believes it is essential to reunite the industry in order to have significant changes and improve the environmental impact of each company.
However, not all signing members are luxury brands. Also retail giants, such as H&M, Inditex and GAP are on the list. The Executive Director of Inditex, Pablo Isla, stated: “All of us at Inditex are compromised with sustainability, it’s one the most strategic principles of our company. The strength behind this project is the conviction – shared by all signing members – that protecting the environment is a collective responsibility”.
The Fashion Pact emerged as a request from the French President, Emmanuel Macron to the CEO of Kering’s Group. “The goal of  the French President was to raise awareness to bring together the disperse environmental initiatives of the industry and, also, activate at least 20% of the sector. This is a reflection point in which the companies have no longer excuses for not acting”, stated the Secretary of State to the Minister for the Ecological and Inclusive Transition, Brune Poirson.
The pact brings together design companies, suppliers and retailers, all already with industrial initiatives around sustainability. Apart from Kering Group, other great brands have signed  this pact, such as Burberry, Chanel, Ferragamo, Armani, Hermès, Moncler, Prada,  Karl Lagerfeld, Ralph Lauren, Stella McCartney and Zegna, as well as retail giants and sports companies, such as Adidas, Nike and Puma.
Marie-Claire Daveu believes that “from the moment the CEOs put their names on this document, there will be actions. Particularly on social media, we’re quickly questioned and all of us know the damages that can be made to a brand’s image”. Kering’s Director of Sustainable Development and International Relation defends that, in the fashion industry, “consumers are the best cops and that, with this pact, results will be quickly visible”.
In October, François-Henri Pinault will reunite all the companies to prepare an annual report on the progresses.

COTANCE incentives European companies to fulfill the environmental pact
COTANCE – association that represents the European tannery industry – recently stated that it will support its clients to reach the proposed ambitions of the Fashion Pact. “The European leather industry shares the goals present on the Fashion Pact and is compromised on contributing for their fulfillment”.
“COTANCE gladly receives the sustainability ambitions described on the Fashion Pact, signed by 32 luxury and fashion brands, most of which are clients from European leather companies. We anxiously wait that the G7 leaders support this initiative and we hope the the goal of 20% of the global industry in volume is reached soon, in order to provide the expected environmental benefits”.
COTANCE is a pioneer on sustainable initiatives for the leather industry by developing tools capable of identifying, providing and certifying the best practices within social responsibility and environmental impact.
Previous Next