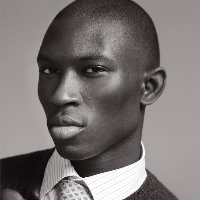 We talked to Armando Cabral, the supermodel who, after an unstoppable career on the catwalk, is now conquering the competitive business world of fashion accessories. One (large) step at a time.
By Manuel Arnaut

From the moment he entered the world of fashion, Armando Cabral has delighted the industry with his elegant and powerful image. During the last decade, the model born in Guinea-Bissau and currently living in New York has been unstoppable on the Dries Van Noten, Louis Vuitton and Givenchy catwalks, as well as on the pages of magazines like Numéro Homme, GQ and L´Uomo Vogue. Nevertheless, more than just a pretty face (although last year it earned him the worldwide campaign for Michael Kors), Cabral has proven to be a skillful entrepreneur. After studying management in London, Armando Cabral again became the centre of attention of the fashion world in 2009, as the founder of his eponymous brand. Passionate about shoes, Armando is at the same time the creator and the inspiration for this cool and versatile label that attempts to ally the elegance of classic models and a more casual approach. A hybrid, somewhere between an Oxford shoe and a more relaxed preppy trainer? Yes, it is possible!

The formula undoubtedly works, since Armando Cabral shoes can already be found in fourteen countries, including China, United States and Portugal, as well at luxury retail website Mr Porter. And if you are asked to walk a mile in his shoes? Trust us, you will want to eagerly accept it.

Despite being one of the most in-demand models of the last decade, your career had a bumpy start. Do you still remember your first major work?
At first, I received a lot of rejections. My own London agency rejected me three times before finally taking me on. It was not an easy road, but I learnt from early on that opportunities don´t just into your lap. You have to find out what you want to do, be persistent and work towards it.
I remember my first major work perfectly well. It was a campaign for the Meltin´Pot Jeans Italian brand. That is when doors began to open and contracts started appearing. Soon after, I was chosen to be a part of the Alexander McQueen + PUMA campaign, photographed by Nick Knight. Meanwhile, I switched agencies and was called for an editorial in i-D, which featured the ten best new faces. That was followed by a campaign for Benetton, and then I was signed an exclusivity contract to do Calvin Klein´s show at the Milan fashion week. At that point, everyone wanted to know who I was.

What is the secret of your longevity in an industry as obsessed with novelty as is the case of fashion?
I really like what I do, and that shows in my work. The clients realise it and value this posture. Besides, I never changed my attitude when I started being more successful. I always give it all I have.


Is there any type of competition (even if a healthy one) between you and your younger brother, Fernando, who has also been having a lot of international success?
There is no competition and there never will be. I love him unconditionally and would do anything for him. We may be best friends, but I have always been his big brother: I give him advice and try to point him in the best direction. I am proud of his effort, dedication and remarkable international career. That is why I question the sincerity of the Golden Globe award, in Portugal. My brother is one of the top 50 models in the world and must have been the only Portuguese to share a set with Kate Moss. And still, he never won anything. But that is another story...

We know that you have been increasingly cutting back your modelling work to devote more time to your brand. Is it hard to leave the spotlight?
Sooner or later, I will have to abandon the catwalk and devote myself to the brand 100%. Nevertheless, for as long as I am able to select the work that I want, I will continue doing it. Reconciling the two things has been easy and it has even helped the growth of the Armando Cabral brand. My modelling career opened up a lot of doors and it is impossible to separate it from my brand.

Why men´s shoes?
I love shoes and I have always dreamt having my own brand. The complicated part was not deciding to create Armando Cabral, but producing something that corresponds to our customers´ expectations. Especially when there is so much competition! These days, the brand has achieved its objective of creating an emotional connection with each customer.

In your website, you say that the shoes are created in the image of your lifestyle. In what way is that reflected?
We design using my personal taste a starting point, and attempt to reflect my image. In terms of lifestyle, we want to respond to the needs of a man who has a career, has fun, travels and takes care of himself. That is my world.

Having studied architecture rather than fashion design works against you or in your favour?
Not having a formal education in the area allows me the advantage of looking at the product from a consumer´s point of view. That makes my shoes have design, comfort and personality.

I imagine that you are very careful when you choose your own shoes. Do you wear other brands? Where do you like to shop?
Shoes are the most important accessory in fashion. It is impossible for someone to be dressed well and wear bad shoes. A lot of people do not realise it, but they say a lot about who we are, from our personality to our economic status. Personally, these days, I do not purchase any other brands, nor do I recall the last time I did so. My shoes are made in the image of my own style and, therefore, the Armando Cabral label gives me all I need.

What are the markets in which your brand is the strongest? I imagine that being listed on Mr Porter was a victory for your company...
We are in fourteen countries. Our presence is more visible in Asia, and we´re growing considerably in the United States and Canada. Being available on Mr Porter has helped a lot, and it is a wonderful platform to reach markets he had not yet entered. We sold 60% of the collection immediately in the first week after getting listed. It was very gratifying.

In the future, would you like to design clothing or other accessories?
The brand is going through a very important phase. We recently celebrated our third anniversary, which I consider to be an important landmark! To celebrate the occasion, we launched, in New York, my first women´s collection, which was very well received by the public. It is impossible to predict what will happen in the future but, for now, our focus will continue on shoes. This is not a race, we will get there when the time is right.
Previous Next