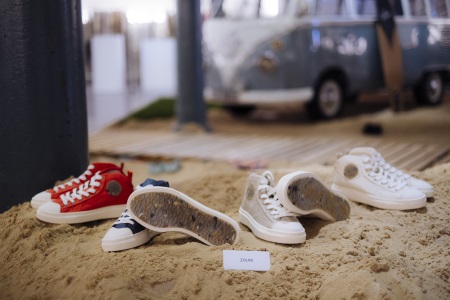 The Portuguese company Zouri, expert on the development of ecological and vegan footwear, was elected as second best project of the year, in the circular economy category, on the last edition of the Social Innovation Tournament, held in Dublin. The contest promoted by the European Investment Bank has received over 200 proposals from all over Europe.
The brand has been the head of one of the greatest innovation revolutions in Portugal, as each pair of shoes recycles the equivalate of 6 plastic bottles, which come from the ocean. The brand’s strategy is based on circular economy, so nothing goes ever really to waste. “Even at the end of a shoe’s life cycle, the customer can send it to a company that will reuse it for urban furniture production”, states the brand.
Zouri Shoes, that had already been presented with the national award by Academia Electrão, has now won its first international award, which allows it to “prove that the brand’s internationalization is a top priority, as we’re already moving towards European markets”, revealed Adriana Mano, founder of Zouri.
The finals of the Social Innovation Tournament was held in Dublin and counted with 15 finalists from 21 nationalities, from all over Europe, and was attended by the Vice-President of the European Investment Bank, Andrew McDowell, and Ireland’s Minister for Children and Youth Affairs, Katherine Zappone.